What is the difference between pesticides and herbicides and why does this ballot measure deal only with herbicides?   Why does it target only aerial spraying and not all forms of spraying?

The term “pesticide” is an umbrella term which also includes herbicides, insecticides, rodenticides, and fungicides. Specifically, herbicides are used to control unwanted plants and are commonly referred to as “weed killers.”  Our charter amendment includes only aerial spraying of herbicides because it is the most prominent, damaging, and dangerous type of pesticide application practiced in Lane County.  Though other chemicals and methods of application also present a threat, the volume of herbicides sprayed aerially and the increased risk of “chemical trespass” makes this the most dangerous type of pesticide application. 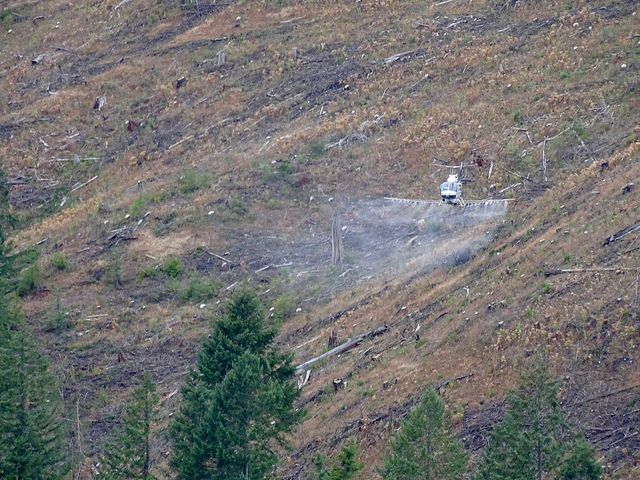 What is aerial spraying and what makes it unique?  What’s the problem with it anyway?

Aerial spraying is the spraying of a liquid (usually some form of pesticide) from small aircraft (either airplanes or helicopters).   What makes it unique is that it is done “higher up” rather than at ground level.  Spraying of herbicides from small aircraft greatly increases the chance of chemicals being caught up by wind forces and spread beyond the scope of the intended area.  This results in “chemical trespass,” where herbicides “drift” in the air and deposit themselves in creeks and streams, on farmlands, homes, and schools where they can cause great harm.

What are other types of Pesticide/Herbicide application practices?

Other methods of pesticide/herbicide application include truck and backpack spraying. While these types of treatment still have problems with toxicity and drift, the effects are localized as they are applied close to the ground and are less likely to “trespass” and contaminate a broader area as aerial spraying does.

Who does aerial spraying in Lane County and in Oregon?  Who will be affected?

Most aerial spraying of herbicides in Oregon is done by the timber industry and larger agri-business landowners engaged in farming.  In Lane County, the vast majority of the aerial herbicide spraying is done by industrial timber companies. There is very little “crop-dusting” done on non-tree “crops” in Lane County.

Why is this initiative only for Lane County rather than the whole state?

This charter amendment addresses only Lane County for the following reasons:

Is there more of a drift/chemical trespass problem with aerial spraying of forest lands than farmland?

Aerial spraying of herbicides in forestland is a greater problem than in flatter farmland in that aircraft have to be higher in the air when spraying in forestland in order due to the irregular terrain.  This greatly increases the risk for herbicide drift, chemical trespass, and a broader toxics exposure to the populace.  This does not mean that aerial spraying of herbicides on flatter farmland is not a significant problem that also results in drift, and chemical trespass in some counties in Oregon.  In Lane County however, aerial herbicide spraying of farmland is not that common and is insignificant compared to forestland spraying.

Haven’t these herbicides been tested and proven safe already, so what’s the problem? 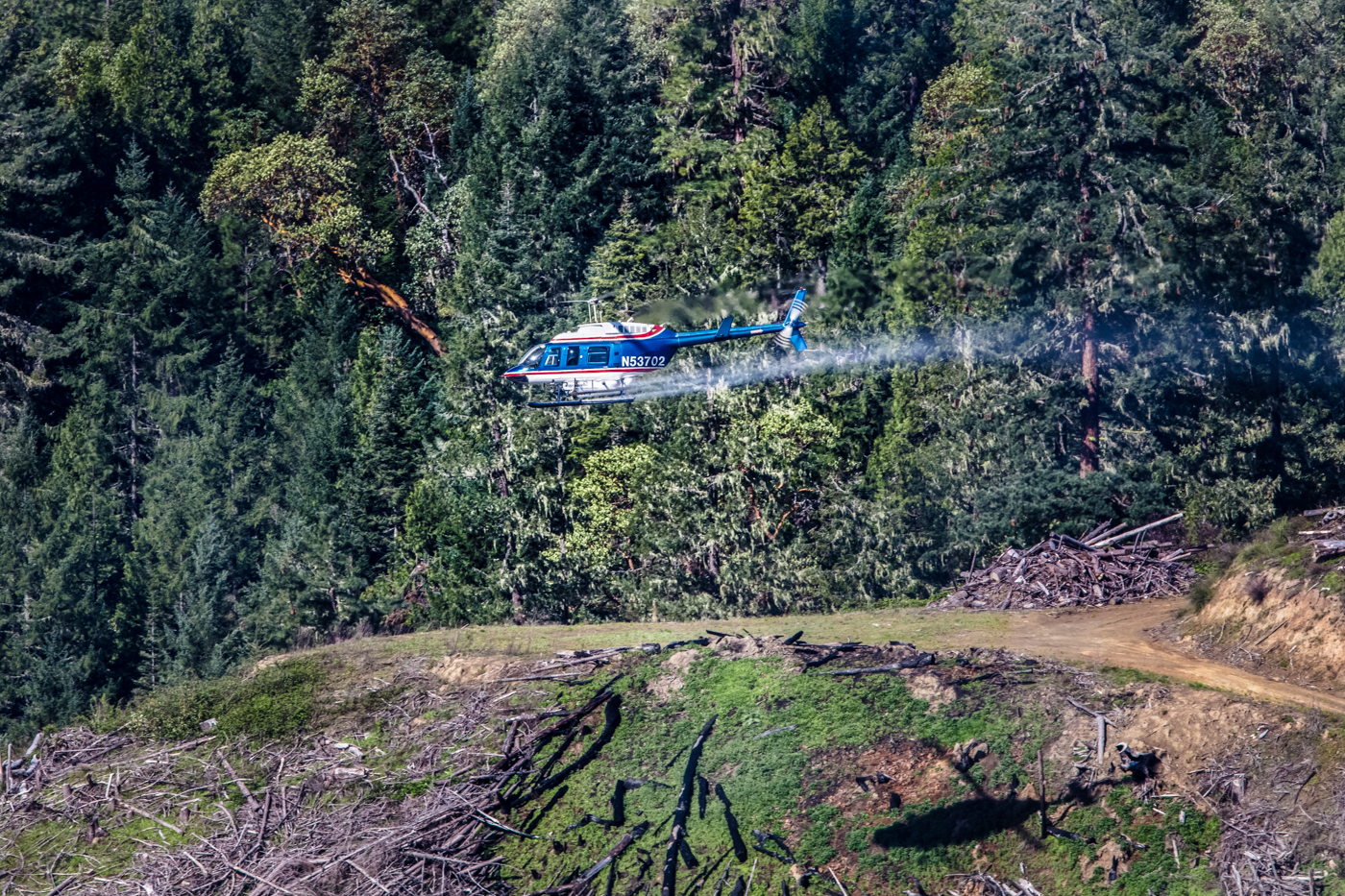 The U.S. Environmental Protection Agency (EPA) used a regulatory loophole to approve 65% of 16,000 pesticides that pose a potential threat to public health, according to the two-year investigation by the Natural Resources Defense Council.  In 1978, Congress gave the EPA authority to issue approvals on a conditional basis for pesticides needed to address public health emergencies. The agency was to use this authority sparingly.  However, in an internal review, the EPA said it had widely (98% of the time) misused its "conditional registration" of pesticides from 2004 to 2010.  Recently, glyphosate, one of the common herbicides used in aerial spraying in Lane County, was declared a probable cancer causing herbicide by the World Health Organization, and California’s Environmental Protection Agency has added glyphosate to its toxic chemical list.  Also, aerial spraying commonly uses mixtures of different herbicides that have not been tested for their combined effects.  We Oregonians are the Guinea Pigs.

What alternatives to aerial spraying are there?

Spraying at ground level is one alternative.  In timberland, this typically requires backpack spraying due to irregular terrain, and in flatter farmland spraying from motorized vehicles.  Another alternative to this is manual removal of competing shrubs or “weeds.”

Why not do this through the state legislature rather than this local Lane County initiative?

Oregon has the weakest regulations with regard to drifting chemicals sprayed to control weeds that sprout after clear-cuts than Idaho, Washington and California. Currently, the industry has a 12-month window to spray after notifying the Oregon Department of Forestry; it does not have to provide a specific date nor are there any set buffers for spraying near schools and residences.  The Oregon State Legislature over the last several decades has shown little interest in addressing this issue.  State Senate Bill 613 (SB613) was introduced in February 2015, prohibiting aerial spraying “in proximity” to schools and residences and requiring better notification of spraying for rural residents.  Due to industry pressure, this legislative effort died without ever receiving a hearing.

This ballot initiative will most likely lessen the short-term profit margins for wealthy out-of–state investors, publicly traded (Wall Street) timber/real estate corporations (such as Weyerhaeuser), and wealthy local timber companies, but it will also encourage longer timber harvest rotations in our county, and that will be better for all of us.   Wall-Street Industrial timber/real-estate corporations and local timber companies have the incentive to pass off some of their costs to the taxpayers of Lane County if we taxpayers allow it.  It is about time we stop subsidizing wealthy investors and corporations, almost all of whom don’t live/reside in Lane County and few of whom even live in Oregon.  It’s also time we stopped subsidizing the local timber companies/corporations that profit from our subsidies and that have adopted the horrendous short-rotation/aerial herbicide spraying practices of the out-of-state industrial corporations.  We Oregon/Lane County taxpayers subsidize these corporations and pay for their collateral damage with harm  to our health, and by having to spend extra tax money for road repairs, habitat repair (such as for salmon), and in some places, huge monetary expenditures for water filtration/purification.  Reintroducing fair and adequate harvest taxes could help compensate Oregon counties so the timber industry would be less able to pass off a portion of their costs to us taxpayers; we who are currently helping pay for road repairs, habitat repair of fish-bearing streams, and expensive water purification systems to deal with damage they cause.

Shouldn’t the real question be:

Who will be harmed if we don’t ban aerial herbicide spraying?  What are the costs to Lane County residents exposed to toxic chemicals with no recourse to protect their health, their drinking water, their land, or their children?  How should we respond to a system designed to profit the industry at the expense of its citizens?